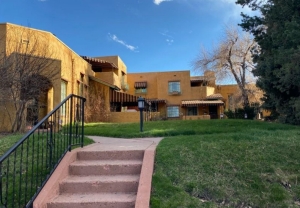 Is there a “save” for Carmen Court?

Carmen Court, located at the corner of 1st and Emerson in the Speer Neighborhood, is a rare example of Pueblo-Revival style architecture and a distinctive landmark due to its prominent and visible location adjacent to the Hungarian Freedom Park and Speer Boulevard, one of our city’s National Register-listed parkways.  The six-unit complex was constructed in 1925 just as the Bungalow Court form made its way to Denver from the west coast.  The original developer was also the designer, Burt L. Rhoads.  Rhoads was born and raised in Denver and served for a time as the chief engineer for the Gates Rubber Company.  He is listed on the building permit for the now-demolished 999 S. Broadway, one of the long-recognizable buildings on the former Gates site.  Rhoads was also brother to Harry Rhoads, the prolific photographer and to Hazel Rhoads Gates, wife of Charles C. Gates.  The Rhoads family grew up near 13th & Logan, and its members lived intermittently in the West Washington Park area for decades.

In March 2020 the owners, along with developer Hines, submitted an application for a Certificate of Demolition Eligibility, as Hines plans to build a senior living complex on the site. This resulted in a public posting of the building’s potential for landmark status, and nearby neighbors submitted a notice of intent to file a designation.  A period of mediation began in April, and Historic Denver has been participating as a resource to try to find a win-win alternative.  This included exploring and identifying opportunities for both development and preservation to occur on the Carmen Court site, which at this time also includes three homes to the south of the complex, offering space to construct a larger building.  Volunteer architects outlined these possibilities in greater detail and shared them with the developer. Historic Denver has also worked to identify an alternative buyer willing to take on the full site, which was one of the paths to resolution identified during mediation.

Neighbors of the building with preservation experience filed a designation application on the posting deadline in late May.  On August 4th, 2020 the Landmark Commission unanimously determined that Carmen Court meets the required three criteria for designation, moving the application forward for City Council consideration. Efforts to find resolution continued in advance of a scheduled City Council hearing, and in October the designation applicants withdrew their application with a commitment from the developer that the building would not be demolished until all permits were approved for new construction, keeping hope alive that the building could still survive. In December 2020 Hines closed on the sale and is now the sole owner of the property.

The purpose of the demolition review process, which brought this building to the public’s attention, is to provide an opportunity to explore alternatives to demolition, and to ensure that all options have been explored before a building of value is lost forever.

Read the report from the Landmark Commission Meeting.