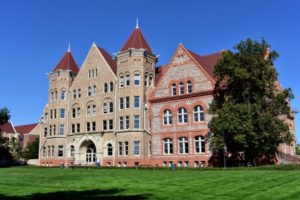 Treat Hall, now know as Centennial Hall, was fully rehabilitated by JWU and is now protected by an easement held by Historic Denver.

On the eastern edge of Park Hill, on what was once the vast open prairie, sits a campus that has endured ups and downs and served generations of students, first as Colorado Women’s College and more recently as the Denver campus of Johnson & Wales University (JWU). In June 2021 the Urban Land Conservancy, Denver Housing Authority and Denver Public Schools purchased the campus and will collectively use the site for educational, residential and other purposes.

Beyond the meaningful history of the college and the women who lived and learned there, the integrity of the campus remains highly intact, with the core buildings all present and in good condition. Reusing the buildings ensures the community benefits, and ensures that the materials, energy, and investments made in the buildings endure for another generation. 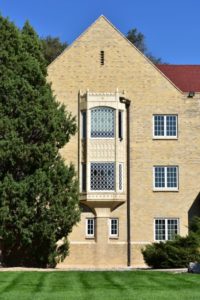 In September 2020, Historic Denver prepared a preliminary inventory of the campus architecture for use by JWU as the property was listed for sale. This assessment helped inform potential purchasers about the campus history, and encouraged reuse, rehabilitation, tax credits and other financial incentives.

We believe several of the buildings may be eligible to become individual Denver landmarks or to be listed on the National Register of Historic Places, while the collection of buildings and the spatial arrangement also has strong potential to become a historic district.

Historic Denver already holds a preservation easement on the central, oldest building on the campus, called Treat Hall or Centennial Hall. The easement ensures the building will be protected and cared for in perpetuity, even as the uses change.

For nearly a century, the campus held its own with Colorado’s other private colleges — a consortium that included Loretto Heights, the University of Denver, Regis University and Colorado College. Its founders had an expansive vision for the school they hoped would be “the Vassar of the West,” and prayed would be “a blessing to all the Rocky Mountain Region for five hundred years to come.” 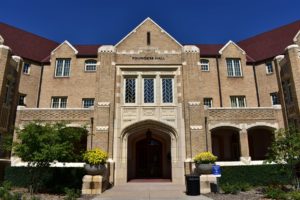 Foote Hall, now known as Founder’s Hall, was the first Axtens-designed building on the campus.

This vision was bold, because it was uttered in 1908, 20 years after work began to build the college. At the time, the city of Denver just barely stretched toward the campus, the location for which had been selected and duly granted by Governor Job. A Cooper in 1888. The idea for an institution of higher education for women in Denver was conceived by Baptist reverend Robert A. Cameron, and it was the Baptist Association of the Rocky Mountains that gave its approval to realize Cameron’s dream.

Fundraising for the school was challenging, and while the architects Jackson & Bettes were hired to design the first building in 1889, and the cornerstone was laid the next year, the building wasn’t fully finished and occupied until 1908. This first building, in the Richardsonian Romanesque style, remains the dominant heart of the campus. It was eventually named Treat Hall in honor of Jay Porter Treat, the college’s first president. During the Johnson & Wales tenure it was known as Centennial Hall in honor of JWU’s centennial year. 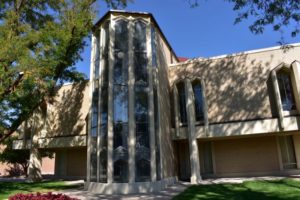 The library, one of the last buildings built during the Colorado Women’s College era, was designed by Victor Hornbein and Ed White, one of Historic Denver’s early leaders.

While the campus’s oldest structure reflects the institutional style of its era — Richardsonian Romanesque — the overall campus character was defined slightly later, and heavily influenced by one designer: Arthur Axtens. Axtens was active as a designer in Denver from 1927 until at least 1957, and during this time he designed six buildings for Colorado Women’s College, although one has since been demolished. Axten’s buildings all follow the same general aesthetic, using the collegiate gothic style, with some Tudor elements, and blond brick that nods to the central wing of Treat Hall. The buildings are positioned carefully on the flanks of Treat Hall, and frame a large central open space, or quad, on the campus.

Nearly all the buildings built at Colorado Women’s College from the 1930s through the 1960s were supported by the philanthropy of one family, that of William A. Porter. William Porter was the son of one of Denver’s early entrepreneurial families. His father, Henry Porter, arrived in the Denver area in 1862, built telegraph and railroad lines, and invested in real estate, largely in the Capitol Hill area. He helped to found and finance the sanitorium in south Denver that would grow into Porter Hospital. William, followed his father’s lead in supporting key Denver institutions and invested heavily in Colorado Women’s College for decades, always anonymously. However, it wasn’t a tightly kept secret as most of the buildings constructed with Porter money bear the name of a Porter family member.

After the Axtens era, the school turned to architects versed in the modernist styles, with Stanley Morse, Victor Hornbein and Edward White Jr. working on five additional campus buildings in the 1960s. Each had connections to one of Denver’s most respected architectural firms, Fisher & Fisher.

Few CWC buildings have been demolished. Axten’s science building — Hutchinson Hall — is gone, and Morse’s Fine Arts Building was converted into the Denver School of the Arts and has been heavily altered. A few buildings were constructed after the close of the CWC era, as investments by the University of Denver and JWU.