As the pandemic raged in 2020 and 2021 residents of the 600 and 700 blocks of Steele Street talked on Zoom, on porches, and on-line about pursuing a small historic district designation, just two blocks long and immediately adjacent to the existing East 7th Avenue Historic District. Among the 19 homes in the proposed area is particularly special, the long-time home of Judge Raymond Jones, the first African American appointed to Colorado’s Appellate Court, and author of over 1,300 opinions.

On December 13, 2021 City Council unanimously created the Easy 7th Avenue-Steele Street Extension Historic District, with Judge Jones and his son in attendance. Judge Jones’ association with the block was an important part of the designation application, and as a contributing structure the home will be protected, and eligible for preservation incentives for rehabilitation. 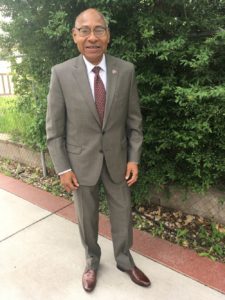 When Raymond Jones moved to Denver to clerk for State Supreme County Justice Edward Pringle after graduating from Harvard Law, he gave a lot of thought to where he wanted to live. He asked his friends and colleagues, and repeatedly heard about the desirability of Congress Park. He was also attracted to the expansive parkway running through the neighborhood, and when he drove by the home at 780 Steele the stately home and large lot immediately caught his eye. He soon rented the house, and within a few years purchased the home. He recounted the prejudice he faced when seeking a home to buy outside the neighborhoods that redlining and discriminatory practices had designated for people of color. He persevered, wanting to live where he wanted to live. When he moved out of his longtime home in 2017 after his retirement, he’d spent more than four decades on the block, and seen the city change several times over.

Recognizing his home as a significant element of this small historic district honors Judge Jones’ contributions to the city, and can help others understand the dynamics that have shaped how our city developed, who had access to which neighborhoods, and how the fight for civil rights and social justice was advanced through activism and personal relationships.

The Judge Raymond Jones home was nominated to Historic Denver’s 50 Actions for 50 Places program and selected as one of the fifty sites in summer 2021. In order to support preservation action for the house Historic Denver provided technical assistance to the residents of the 600 and 700 blocks of Steele Street as they prepared the historic district nomination. Historic Denver staff reached out to the Jones family, conducted an oral history with the Judge in May 2021, and completed research about his impressive life experiences and accomplishments, including his activism during the Civil Rights Movement, his support for local arts and cultural organizations, and his legal career. This information was incorporated into the designation application, and the Jones’ participated in the public hearings about the designation, offering their perspective and support.

Historic Denver hopes to identify additional opportunities to share the story of Judge Jones, and to ensure residents of Congress Park know about, and continue to honor, the place he called home for so many years.

Jones owned and resided at 780 Steele Street for more than forty years, and was a well-known personality on Steele Street and a respected figure. Born in Pueblo, Colorado Jones studied political science at Colorado College, one of only five African American students in attendance in 1964. During his college years Jones worked for Colorado Congressman Frank Evans, including time spent working in Washington D.C. and on Evans’ campaigns. This gave Jones an appetite for politics and the law, and after graduating from Colorado College Jones went on to earn a law degree from Harvard University in 1971. He then worked in New York City on Wall Street but was lured back to Denver to clerk for the Chief Justice of the Colorado Supreme Court, Justice Edward Pringle.

In 1988, he became the first African American appellate judge in Colorado. He served as a justice for 32 years; half of this time was spent on the Colorado Court of Appeals where he wrote 1,400 opinions, with only three opinions overturned. As he stated in his alumni profile in the Colorado College Bulletin in 2013, he believed that it is “incumbent on all of us to help others to know that what is similar in all of us outreaches that which is different.” This philosophy steered his life’s work and provided a roadmap to “resolve disputes and bring peace around the world.”

Jones helped form the Sam Cary Association of Black Attorneys, and Cleo Parker Robinson Dance Theatre (CPRD), the home of the modern dance ensemble. He was inducted in the Colorado Black Hall of Fame in 1990.  He received the Dr. Martin Luther King, Jr. Humanitarian Award in 2012. In 2016, Judge Jones reported that he had attended every single Martin Luther King Day Marade since its beginning. The restaurant at the City Park Golf course (Links) named a sandwich for Judge Jones as a light-hearted gesture of love and recognition of his contributions to the community.