During the summer of 2015 the community learned of plans for a new development on the western side of the 1600 block of Pearl Street. The site, largely made up of parking lots, was also home to four buildings, among them the storefront structures at the corner of 17th & Pearl, which in recent years have been home to the Tavern Uptown. As soon as the news broke the community began expressing concern about a building that has meaning to the city’s story, and plays an important role in hte character of 17th Avenue, sometimes called Restaurant Row. To provide an organized forum for the response Historic Denver created a petition, which ultimately garnered over 1700 signatures asking for the preservation of the building as part of a development that could honor the character of 17th Avenue and make good use of adjacent vacant land.

Despite the fact that the building was deemed non-historic by city staff during demolition review, given the public support to save the building, Historic Denver reached out to the site’s new owner, Southern Land Company. Fortunately SLC was very receptive to conversations about saving the Tavern building, including the two-story corner building and adjacent one-story building to the west. 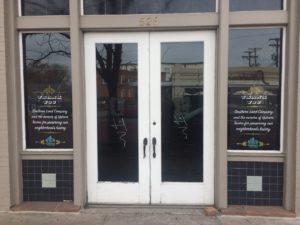 The Solution
After several months of discussion, SLC agreed to pursue a rezoning and site plan that pulls the new structure back from 17th, retaining the Tavern building and the most significant aspects of the adjacent one-story building, as well as the traditional scale of 17th Avenue. SLC can do this by shifting some of the units that would have been built along 17th by adjusting the zoning to allow two additional floor plates. However, it is important to note that even with these additional floor plates, the project will not exceed the height limit set by the original zoning, which is 110 ft at the northern portion of the site and 70 ft at the southern, 16th Street edge. A zoning change is only required to allow for the additional floor-plates, and does not result in additional height. This means that what could have been an 8-story, 110 foot building at 17th will now be a 10-story, 110 foot building pulled back from 17th, stepping down to a six story, 70 foot building at 16th. The rezoning was approved in late 2016, with the support of Historic Denver and several neighborhood organizations. Historic Denver and SLC have further written and agreed to execute a second, even more detailed, Preservation Agreement that will protect the Tavern Building long into the future.

The History
Originally a grocery store, the Tavern building was designed by James Costello in 1900 to serve the neighborhood we now call Uptown. Right on the 17th Avenue Streetcar line, patrons could stop by after work to purchase their groceries before heading home. The land was owned by William Russell, a real estate developer and society man (no relation to gold prospector William G Russell of early Denver fame). When he died in 1935, the Denver Post and Rocky Mountain News both noted that Russell was a well-known figure about town. The building served as a grocery for many years before being turned into a bar, first as the Black Timber Tavern and later the Grand, before becoming the flagship Tavern in 2002. The character of 17th Avenue is defined by its small brick commercial buildings. Few of them function in their original capacity, but all of them activate the bustling corridor and turn it into a desirable location to live, shop, and eat.