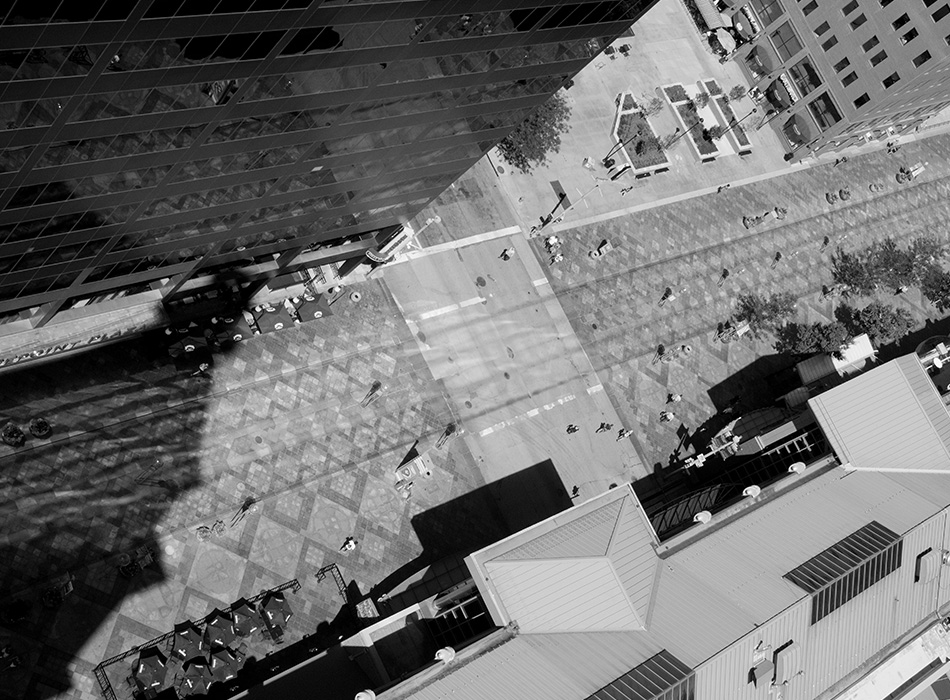 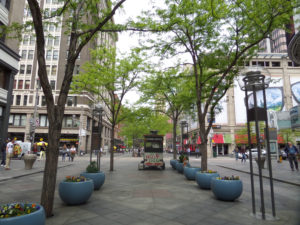 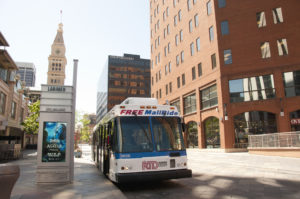 Opened in 1982, the 16th Street Mall is among the most iconic places in Denver, recognized for its high quality design, enduring materials, and value as a civic space. Officially recognized as eligible for the National Register of Historic Places due to the exceptional caliber of its design and designers, including I.M. Pei, Henry Cobb and Laurie Olin, the ULI called it “public art of the highest international quality.”

For over a decade various planning processes have considered the fate of the masterpiece, which requires significant maintenance due to heavy wear and tear. In April 2022 the City of Denver, RTD, and the Downtown Denver Partnership broke ground on a full reconstruction of the Mall, which is intended to honor some elements of the original design but will ultimately transform it – resulting in such significant loss of integrity it will no longer be eligible for the National Register of Historic Places.

As the spine of downtown the 16th Street Mall was a bold and visionary move by Denver’s leaders struggling to revive a declining downtown in the 1970s, when suburban development drew offices and retail away from the center city. The decision to invest in the highest caliber design was intentional- it would showcase downtown as a modern civic space, provide respite and gathering spaces, and prioritize the pedestrian in an era that cars dominated. It was the city’s “postcard” to the world, and the most visited tourist destination in the city. The Mall’s designers were all masters in their art, although the Mall and Pei’s earlier Zecendorf Plaza Parabaloid (demolished in the 1990s) predated his iconic addition to the Louvre in Paris. The Mall is one of the longest linear landscapes in the country, the Mall was lauded as a masterpiece from its opening day. For over thirty years it has served the city, with increasing bus and pedestrian usage every year until the 2020 pandemic.

Since 2008 Historic Denver has advocated for the Mall’s design as an important civic space and a world class example of urban landscape design- created by masters of the 20th century including I.M. Pei, Henry Cobb, and Laurie Olin. Historic Denver actively participated in several processes, consistently expressing the importance of preserving:

Through the planning process compromises were made as we tried to work collaboratively with the entities that oversee the Mall today, the City of Denver, RTD, and the Downtown Denver Partnership. While some of the original elements will be apparent in the Mall’s redesign, notably through the reinstallation of the light fixtures, through the replanting of trees in linear rows, and through the use of granite, much will be heavily altered.

Most disappointing, after compromises and commitments were made to recreate the granite paver-pattern, inspired by Navajo rugs and a snake skin belt the designer noticed in a 16th Street shop, plans shifted late in the design/build process, which now calls for using smaller pavers than the original, and for laying them differently in the transit lanes and the pedestrian lanes, breaking-up the unity and cohesion of the intricate and elegant design.

The idea to create a mall on 16th street in Denver began as early as 1959, but was not given serious consideration until 1971. Following years of planning and construction, the 16th Street Mall, designed by the internationally renowned architectural firm I.M. Pei & Partners of New York, opened on October 4, 1982 to a crowd of over 200,000 people.

The main features of I.M. Pei’s design include poly-chromatic granite pavers, wide sidewalks, and a central tree lined corridor flanked by iconic lighting fixtures. Now, decades later, the 16th Street Mall has evolved into the veritable “heart and soul” of downtown Denver and a top visitor attraction in the metropolitan area.

The Mall was designed as a cohesive whole. Its pattern, inspired by southwestern imagery — including the Navajo rug and a diamondback rattlesnake — was intended to dissipate as it stretched toward its edges in order to not distract from the building façades or retail displays within. The pattern, consisting of granite tiles in charcoal gray from Minnesota, light gray from Massachusetts, and Colorado red, helped to ground the surface and reduce material monotony, which can plague streetscape interventions of this size. The lighting was designed to complement the honey locusts and red oaks planted precisely within the field of the paving pattern. The trees provide a highly formalized nod to the natural surroundings both within and near the City, while the lighting provides a unified glow along the promenade that was intended to fade and brighten according to the daily rising and falling of the sun. Each design element on the Mall was special and inter-connected, making planning and problem-solving on the mall particularly complex.

For this reason the Mall has sometimes been described as a “Swiss watch.” In 2008, an Urban Land Institute study commissioned by RTD, the Downtown Denver Partnership and the City of Denver proclaimed that “the Mall is a unified concept and public art of the highest international quality.” The panel explained that “the lighting, landscaping and paving all form part of a single unit” and that any changes “must be made cautiously and with full respect for the original design.” It even went on to state that “the panel recognizes the need to address challenges posed by deferred maintenance and failed construction technologies; nevertheless, upgrades and repairs should be made with full respect for the original design.”

The ULI study was further supported by the outcomes of the 16th Street Mall planning process, a robust and transparent public process that took place in 2009-10. This process included a detailed technical assessment of the mall’s infrastructure, where a Steering Committee of stakeholders and several expert consultants, including Historic Denver, drilled into the details, assessing the mall and evaluating alternatives. More than 3,600 members of the public participated in the effort. At the conclusion of this process there was wide consensus regarding the importance of the Mall’s overall design, including the granite pavers, recognizing that the Mall is an irreplaceable legacy project. As a direct result of that two year public process, the Mall’s three leading stakeholders – RTD, the City, and the Downtown Denver Partnership – committed to a rehabilitation plan for the Mall.

However, by 2016 RTD again proposed replacing the Mall’s granite with concrete. The City of Denver, RTD, and the Downtown Denver Partnership agreed to convene another planning process to revisit more than the Mall’s materials, and brought in Gehl Architects to analyze Mall usage and pedestrian traffic. Historic Denver remained engaged and at the table throughout, and because of the significant federal funds invested in the Mall each year the planning process was required to follow federal preservation processes, known as Section 106. That process was on-going, but culminated in 2019 with a Programmatic Agreement among the local agencies, the Colorado State Historic Preservation Office, and the Federal Transit Administration.

The agreement acknowledged that the newly agreed upon Mall design, which would realign the transit lanes, remove the original center medians, remove and replace the trees, and reconstruct the paver system, would adversely impact the Mall’s historic design. The agreement then also outlined how those impacts would be mitigated, particularly through a design commitment to replicate the original paver pattern in the original material and colors.

Sadly, by 2021 the project partners again shifted design plans, and rather than replicating the paver pattern as presented to the public in 2018 and 2019, they now intend to use smaller paver modules, some in different shapes, and to construct the transit-lanes and the pedestrian way with different size pavers. This will significant disrupt the cohesion of the original design, one of its most iconic features. Historic Denver objected to this change in plans for many months, seeking resolution from the Advisory Council for Historic Preservation, which encouraged continued consultation and mitigation. However, the Federal Transit Administration, which is provided significant funds to the project, has endorsed the change to the paver design and installation plan.

How You Can Help