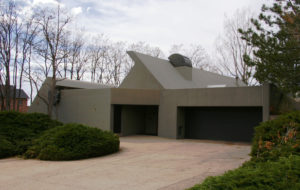 Three Denver residents have applied for landmark status for the Crowther House in Cherry Creek — a building that is worthy of, and meets the criteria for, landmark designation. The property owner opposes designation and plans to demolish the building and redevelop the site. Denver’s Landmark Preservation Commission will consider the application at its meeting on Nov. 1, 2022.

The Crowther house is the embodiment of Richard Crowther’s career, innovation, design and does it all while being distinctly modern, a style of building that is constantly under threat of demolition.

We are rapidly losing examples of this influential architect’s career, and examples of the buildings that laid the groundwork for environmentally-conscious designs. These structures and Crowther’s work in general are an important part of Denver’s story as well as the environmental movement in the United States.

In the case of the Crowther House at 401 Madison St., Historic Denver engaged in conversations with the applicants, the property owner, and preservation-minded potential buyers who we hoped might consider saving this historically significant building — without finding a workable solution thus far.

The building is a unique architectural asset; it clearly meets the criteria for landmark designation. Historic Denver stands ready to lend its support to help find a win-win outcome, should the owner and the community be willing to swiftly and in good faith explore alternatives to demolition.

Crowther designed residences and office buildings with passive solar technology, but his own home at 401 Madison remains one of his most innovative examples. The design at 401 N. Madison embodied his guiding fossil-fuel-free design philosophy and was completed at the height of his architectural career as he advanced sustainable architectural practices.

The house’s significance is not limited to its innovation as a green and sustainable design. It is also an excellent example of late modernism and the modernist aesthetic that Crowther often incorporated in his designs. Architecture such as this is often overlooked or demolished without consideration for its historic significance because it can challenge the traditional image of a historic building.

The Crowther House was built in 1979 and designed by Crowther. He intended the house to not only serve as his family home but also as a green building laboratory and studio. Nearly every component of the home, from the angle of the windows to the solar heated pool in the basement was designed as part of a sustainable system. In the 1970s and 1980s Crowther’s work was at the peak of innovation and paved the way for later technologies in green building. Crowther saw the field of architecture as a major component of environmentalism, and he incorporated these ideals into his designs, theories and writings.

The house embodies the characteristics of modernist residential design from its horizontal form, lack of ornamentation, sculptural qualities and materials. Many modern structures also emphasize functional features. The Crowther House was oriented and designed so that the majority of the windows were placed on the southern side to capture the most hours of sunlight. This includes the angled windows in the prominent triangular feature atop the building which provide a breadth of natural lighting for the structure.

Westword writer and architectural critic Michael Paglia describes Crowther’s body of work as “…not ugly neo-traditional buildings; rather, they are shamelessly modern and breathtakingly beautiful. They show off groundbreaking technologies contained within vanguard formal expressions, and the best of them are as sophisticated as anything anywhere in the world.” Denver has a few surviving examples of Crowther’s work, such as 500 Cook St., though some have been lost or are on the slate for demolition. An often-cited example of his solar design in Cherry Creek North is the office structure at 310 Steele Street, which received a certificate for demolition eligibility from the city earlier this year.

Richard Crowther was born in 1910 in Newark, New Jersey. He relocated to San Diego when he was 21. There he began his career in design working with neon lights, something that would often be emphasized in his early career. Crowther received some formal training, but he learned much about design while on the job. His interest in sustainable design began in 1943 when he built his first passive home in San Diego’s Balboa Park. Crowther made his way to Denver in 1948 and got his start at Lakeside Amusement Park. Crowther designed a number of signs, ticket booths and ride entrances during a partial remodel of the park in the late 1940s. Lakeside was just the start of a long and influential career in Denver. Early on he was known for designing buildings for well known businesses such as Joslin’s and Fashion Bar department stores, King Soopers grocery stores, and several restaurants. A few iconic restaurant designs of Crowther’s were the Holiday Drive-Inn, Golden Lantern and White Spot.  He was known for some theater designs such as the Esquire and the Cooper Cinerama theaters. A number of these early Crowther designs have already been lost to demolition.

As Crowther’s career continued, he began to implement passive solar energy systems and holistic designs into his architecture. He became sought after in Colorado and the Southwest for this work. Crowther wrote papers, articles and books on the topic. He authored the textbook Sun/Earth: Sustainable Design which is considered a benchmark in holistic architecture design. The textbook contains arguments outlining economic and environmental benefits for passive design. Crowther lectured at the Smithsonian Institution, universities and conferences. Seen as an expert on the topic, Crowther laid the groundwork for the green building field, which did not come together formally until the 1990s.

Crowther was a major part of the development of the Cherry Creek neighborhood and designed a number of structures there, though many of them have been lost. He is also noted for his help in designing the Atmospheric Science CSU Solar House Environmental Village project at CSU in Fort Collins.

Crowther would occupy his Cherry Creek North residence until his death in 2006, but he left behind a rich legacy in Denver’s built environment and in the field of environmentalism.

Read more from Michael Paglia in Westword and John Wenzel in The Denver Post.

If you are a preservation-minded potential buyer or have other resources to offer, please contact Historic Denver’s Michael Flowers at mflowers@historicdenver.org.