We celebrated the life of our former walking tour guide, friend and Denver historian Joe Sokolowski last Sunday at the Wings Over the Rockies. In celebration of his many accomplishments, here is a memoriam article that originally appeared in Historic Denver News. 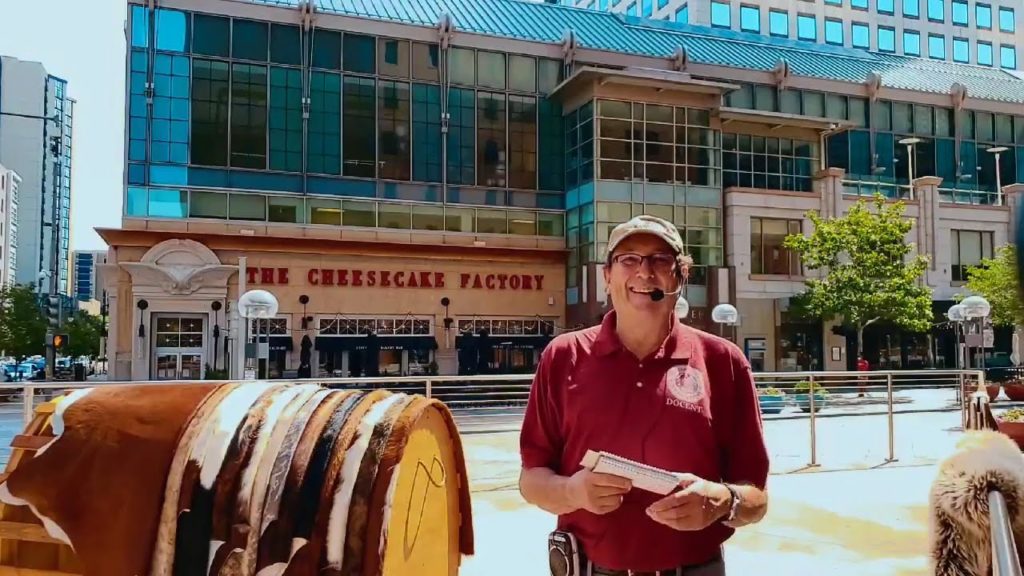 Anyone who had the pleasure of knowing Joe Sokolowski or was lucky enough to take one of his waling tours might rattle off the following adjectives: smart, loyal, warm, generous, funny.

That last one served him well during the 2019 National Trust for Historic Preservation conference when he entertained a busload of 55 who were temporarily trapped on a bridge over I-25. The day before, the mercury had maxed out at 83 degrees. By Thursday morning it was 19 and snowy – the largest October temperature swing on record.

While I quietly panicked, Joe and I tried our best “history comedy” route to entertain our passengers while the drive dropped the chains and cleared the ice behind the tires. He pretended we were on a game show and asked me if I could guess – Price is Right rules of course – what he paid for his first house in the Highlands. As someone born around the same time as the purchase, I got it wrong by tens of thousands of dollars. Once we were finally up the hill and fully into the Northside, I looked at Joe and said, “What did I even write a script for?” He laughed and in the next beat started dazzling the attendees with his knowledge of the historic Town of Highland.

Denver got lucky when the United States Air Forms moved Joe to Lowry Air Force Base. After he was honorably discharged in 1977, he spent 40 years in the car business, working at local institutions like Ralph Schomp Automotive and Rickenbaugh Cadillac before he retired in 2019.

In 2007, after his youngest child finished high school, Joe realized he had 109 credit hours and only needed 125 to graduate. He emerged years later, in December 2010, with a bachelor’s in history from University of Colorado at Denver. As a UCD student, he presented on working-class housing at the 2010 Saving Places conference and returned in 2016 with LoDo & Its Adaptive Reuse, where Joe explained the history, redevelopment, and reuse of Denver’s Lower Downtown Historic District.

By then he had already begun volunteering with Historic Denver. In March of 2013, he joined the first class of docents to launch the LoDo walking tours, where he began the research that would lead to that 2016 talk.

As the walking tour program grew, so too did Joe’s knowledge, support and willingness to give back. He helped develop the Larimer Square tour and was certified to give all of the Historic Denver core walking tours. In 2014, Joe began writing a Sunday night email sent to fellow docents that included additional research he uncovered about people or places related to the walking tours. This morphed into the Denver History Blog, which you can still read here.

Joe generously attended the training of, presented to, and befriended each new class of tour guides, which is how I became lucky enough to be mentored by Joe when I joined up in 2018. He and his wife, Rita, also frequently donated to causes he loved and would happily take-on additional projects, like filming virtual tours during the COVID-19 lockdown.

In addition to his volunteer work with Historic Denver, he joined the Denver Posse of Westerners in 2012; they honored him with the Fred A. Rosenstock Award for Lifetime Achievement in Western History in December 2021. Joe also brought his camera nearly everywhere he went, taking walks specifically to see Denver’s past and the new construction of its future. As a result, he amassed a photo collection that could have landed him on the TV show Hoarders. Instead, the acquisitions team at Denver Public Library’s Western History and Genealogy Department is interested in reviewing it and seeing which images might find a forever home in their collection.

In the months before the Sokolowski family became intimately familiar with the words “glioblastoma” and “brain tumor”, he set up a bird cam, which typically functioned more like a squirrel cam. Though the squirrels never cared much for history, like the rest of us, they miss him terribly.