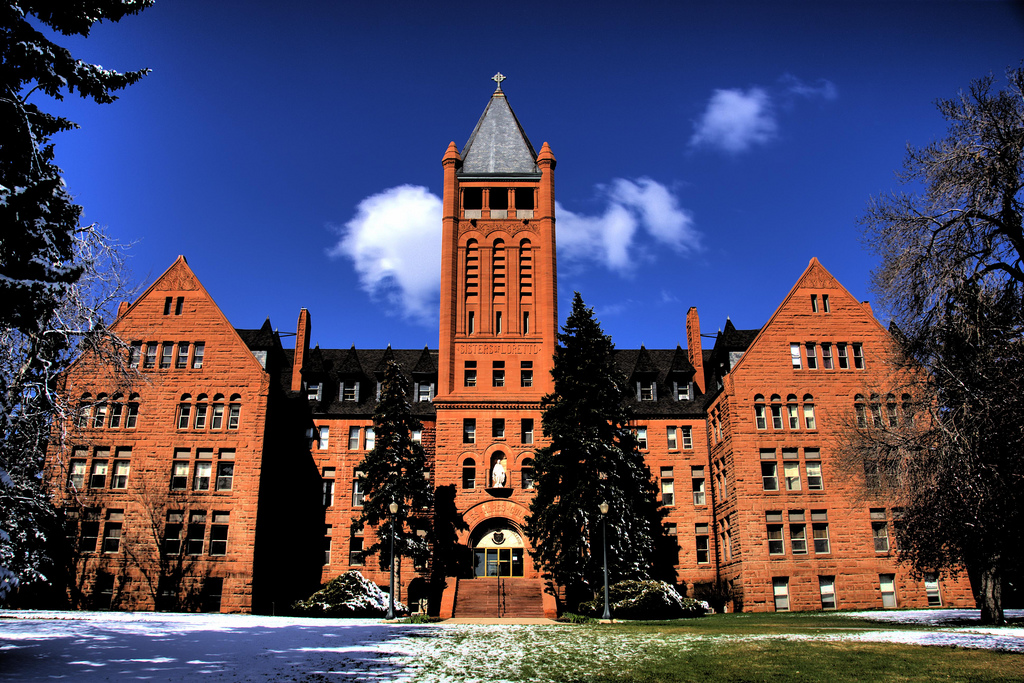 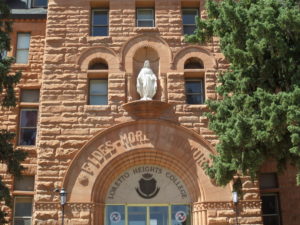 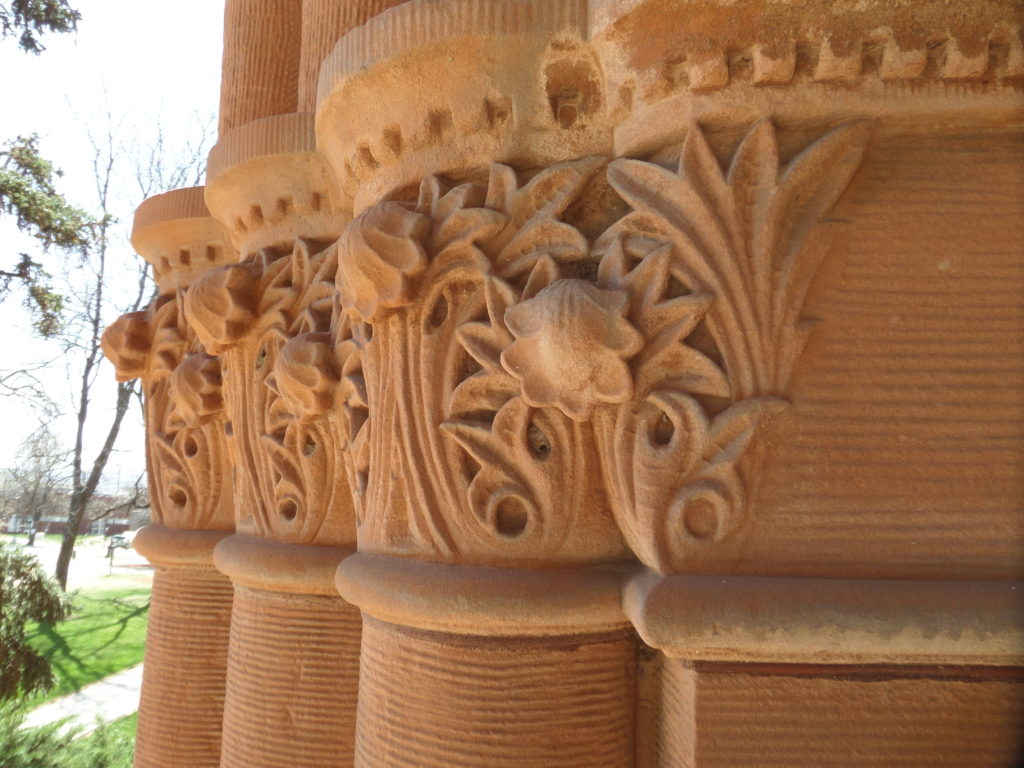 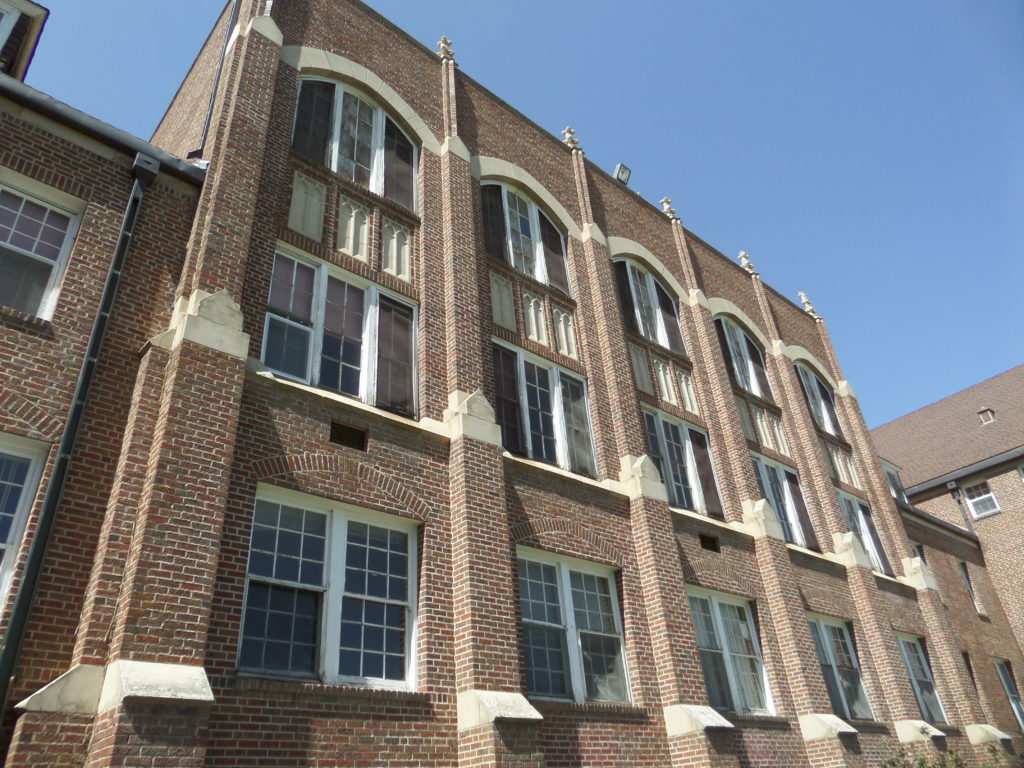 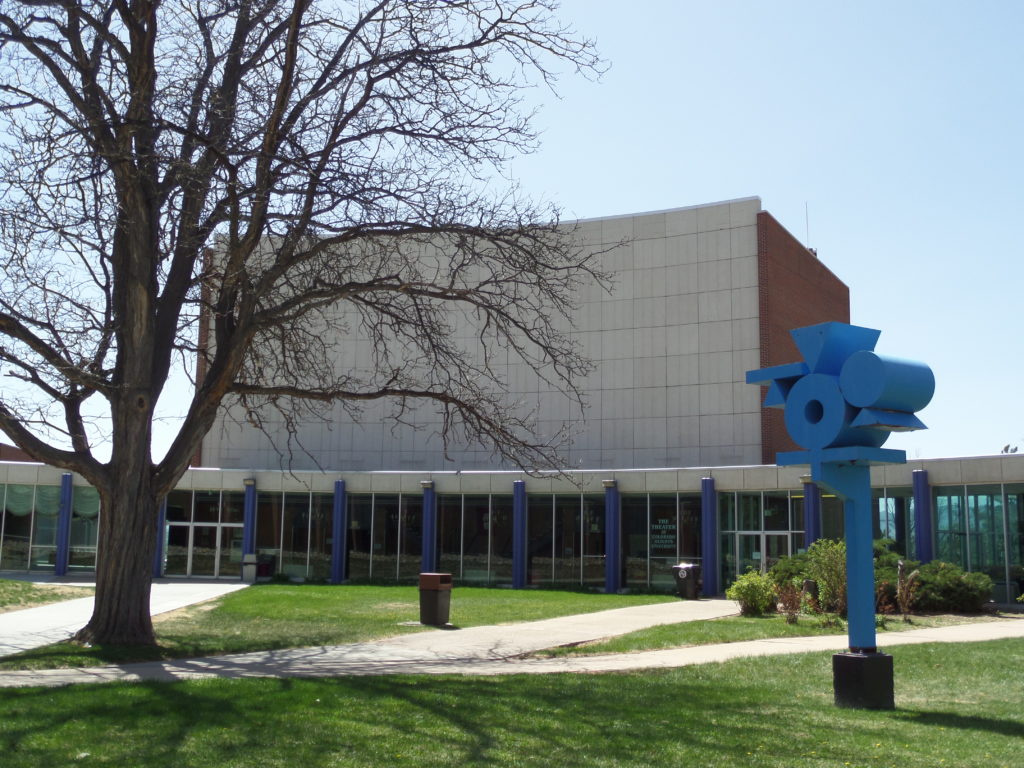 Key Historic Buildings to be Preserved

Preservation work is underway at Loretto Heights within the broader redevelopment project, following a multi-year public planning process. The Administration Building and connected chapel, which are listed on the National Register of Historic Places, are now protected by an easement donated to Historic Denver by the owner. Pancratia Hall — the 1928 dorm designed by architect Harry Edbrooke — will reopen as more than 70 affordable housing units. In November 2021, Denver voters approved bond funds to support the city’s acquisition of the May Bonfils Theater so that it can be rehabilitated for community use. Adaptive reuse is also slated for other notable buildings, such as the library, Machebeuf Hall and the priest’s house.

The historic buildings of Loretto Heights stand prominently on a hilltop site in southwest Denver with a stunning panoramic view. They served students from 1891 until 2017 — first as a girls’ boarding school on the prairie, and later in several iterations including colleges, a high school, nursing school and military training ground. In addition to playing a large role in the history of women in Colorado, the campus’s buildings were designed by some of Denver’s most prominent and accomplished architects, and reflect the architectural styles and materials of their era.

In June 2021 Denver City Council approved a rezoning and development plan for the Loretto Heights campus. This marked the culmination of the multi-year planning process, including a small area plan. Historic Denver served on the stakeholder group for the small area plan, and has consistently advocated for the preservation and rehabilitation of the existing structures on the campus.

The founding of Loretto Heights began in 1864 when Father J.P. Machebeuf was sent to Colorado as a missionary. He was accompanied by three Sisters of Loretto from the Loretto Motherhouse in Kentucky. Upon their arrival in Colorado, they lived in a two-story, framed house at what is now 15th and California streets. This building would become St. Mary’s Academy of the Loretto Order, a boarding school for young girls in the Denver area, teaching them foreign language and refined skills. While enduring the hardships of the developing West, the Sisters of Loretto gained high esteem and attracted many daughters of Colorado pioneers to their academy. As the number of pupils increased, the sisters expanded, continuing their mission of education and tradition.

On March 19, 1888, Mother Pancratia Bonfils (a cousin to the prominent Bonfils family), superior of the academy and alumna of St. Mary’s Academy, sought to start a new academy, far from the expanding “downtown” Denver area. Mother Pancratia and the other sisters chose a hilltop site approximately seven miles southwest of Denver with a stunning panoramic view, which they called “Loretto Heights.” From this view, the sisters could see the Platte River to the east where miners had left their mark, and Fort Logan to the southwestBeyond that, “the view was uninterrupted by any habitation of man.”

Soon after, architect Frank Edbrooke was contracted to design the main academic building, and construction began in 1890. By November 2, 1891, the sisters and pupils were moving into the new building. Despite minor difficulties (lack of water and electricity, as they were so far from downtown), by 1892 all was under control and the sisters settled in.

The growth of Loretto Heights continued, with the sisters developing a rich curriculum, until they were threatened with foreclosure in 1894 after the Panic of 1893. Thankfully, Mother Superior Praxades Carty was able to save the academy from foreclosure and the academy continued on. Through the many struggles the academy faced, it was able to overcome and adapt to the constantly changing times. When World War I erupted, the sisters turned Loretto Heights Academy into a military training ground and held a National Service School. By 1926, Loretto Heights had gained its college accreditation, and Mother Superior Eustachia Elder was organizing the separation of the college and high school.

The Great Depression and World War II could not shake the deeply-rooted Loretto Heights College. Loretto Heights College contributed to the war effort and in 1945 created joint collegiate nursing programs to meet the growing desire amongst women for economic independence in the postwar era. In the face of the social changes and events happening around them (new technology, the women’s movement for equality, the Civil Rights Movement and the Vietnam War), tradition and morals at Loretto Heights remained consistent, while it simultaneously worked to cope and adapt to societal changes. Loretto Heights College was the first school in the area to establish a Women’s Studies Research Center. In 1971, it pioneered the University Without Walls program with 12 other colleges across the nation – a program designed to help adult learners earn bachelor’s degrees, with flexible schedules, skills learned through life experience counting as credit hours towards a degree, and more practical courses.

Although the sisters lived a relatively austere life on the plains, they sought out some of Denver’s best architects to design the buildings on the campus. Frank Edbrooke designed the original 1890 Administration Building and the attached 1911 Chapel. In 1928, the sisters commissioned Harry Edbrooke to design the first free-standing dormitory, naming it Pancratia Hall after the founding mother.

As the campus grew, new dorms were added, and in 1960 Denver architect John K. Monroe designed the Machenbeuf Building, which was used as the student union and cafeteria. Monroe was also responsible for designing the Lowenstein Theater on Colfax Avenue (now home to the Tattered Cover). In 1963, the campus added a dedicated library and theater, designed by G. Meredith Musick. Musick was a well-known local architect who designed the First Baptist Church at 14th and Grant, the Bryant-Webster Elementary School, Fitzsimmons Army Hospital and Lowry Air Force Base.

In 2012, Denver Public Schools (DPS) began leasing six acres on the southern end of the historic campus to house the Denver School of Science and Technology’s College View campus. In the spring of 2017, DPS bought these six acres.

Frank was born in Lake County, Illinois and along with his brothers learned architecture from his father, Robert J. Edbrooke. Frank came to Denver in 1879 to supervise construction on the city’s first iconic building, the Tabor Block and Opera House, designed by his brother Willoughby. He stayed in Denver and became the town’s most notable and successful architect. He designed the Navarre (1880), Oxford Hotel (1890), Brown Palace Hotel (1892), Denver Dry Building (1894) and the old Colorado State Museum (1915). He often used native red sandstone, brick, and terra-cotta to create massive, but graceful structures. 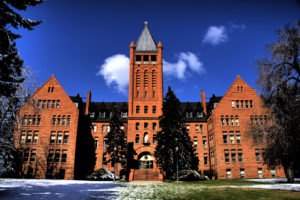 The Main Building was built in 1890, designed by Frank Edbrooke. It was listed on National Register in 1975. 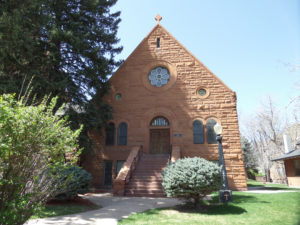 The Chapel at Loretto Heights was built in 1911, designed by Frank Edbrooke. It was included in the 1975 National Register listing for the Main Building.

Harry Edbrooke was the nephew and apprentice of Frank Edbrooke, and the son of Willoughby Edbrooke. He too was born in Chicago, moving to Denver in 1908. He practiced with his uncle until Frank retired in 1915, at which time Harry opened his own practice. In Denver he designed the First National Bank (1910), the Gas & Electric Building (1910), the Kistler Building (1916), the Ogden Theater, the A.T. Lewis Dry Good Store (1917), the Fifth Church of Christ Scientist, and Valverde School (1923). 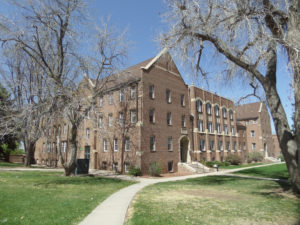 Pancratia Hall was built in 1928. Designed by Harry Edbrooke

Born in Denver, Monroe worked as a senior assistant to noted Denver architect J.J. Benedict before opening his own practice in 1932. Like Benedict, Monroe often worked with the Catholic Archdiocese and became its chief architect at midcentury, designing dozens of Denver churches including Holy Ghost and Good Shepherd. He developed a close relationship with Helen Bonfils, so in addition to churches and ecclesiastical buildings he designed the Bonfils Memorial Theater, later the Lowenstein complex. His relationship with the Bonfilses, and also the archdiocese, likely brought him to Loretto Heights. The Machebeuf Building is an unusual Monroe design because it varies from the signature blond brick and cream terra-cotta detail found in many of his other designs. It was designed in the year following the creation of a partnership between Monroe and two former assistants, Robert Dunham and Robert Irwin, as Monroe was nearing retirement. 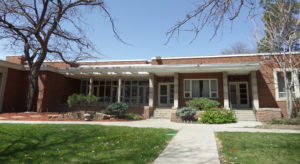 George Musick designed a wide variety of commercial and institutional buildings during his 55 years as a Denver architect. He is best known for his Colonial Revival style First Baptist Church (1938), Bryant Webster Elementary School (1930) and what is now the Champa Commons at 1245 Champa. He designed the now-demolished Republic Building and Shirley-Savoy Hotel Annex. He worked for a time for Frank Edbrooke, and later Jacques Benedict and Harry Manning. George (known as Mark) partnered with his brother, James Roger Musick, on many projects. His sons also joined his firm in his later years. 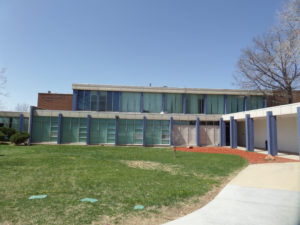 The Library was built in 1961, designed by architects Musick and Musick 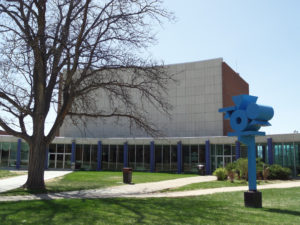