The Effort to Save one of Park Hill’s Oldest Homes

Earlier this year, the 1889 Queen Anne house at 3435 Albion St., one of Park Hill’s oldest extant homes, posted for demolition review. Formerly known as Kate’s Restaurant, the structure has been vacant since 2017 when the Garden, the business that followed Kate’s, closed shop. The house exchanged hands a number of times but eventually fell into disrepair due to lack of maintenance, vandalism and break-ins. The damage done to the interior and the size of the corner lot made it an attractive candidate for a scrape and build project, and earlier this year the property was threatened with the possibility.

An application for a Certificate for Demolition Eligibility was filed for the property. The owners wanted to sell it and their prospective buyers would only purchase it if they were guaranteed the ability to demolish. The city staff posted it for demolition review, declaring that it was eligible to be a local landmark. The property was already recognized as a significant historic structure. Former owner of Kate’s Restaurant, Lynn Smith, listed the house on the National Register of Historic Places in 2003 for its architectural significance. Concerned citizens from the community filed an intent to designate, and the deadline for the city to approval the CDE was extended.  During this extension Historic Denver was able to help connect a preservation friendly buyer to the sellers, and they eventually agreed to a deal. As a result, the CDE was application was rescinded and the threat to the historic house gone.

The new owner is determined to save the house but would also like to capitalize on the lot size by building a modest development of around five units. This project requires a zoning change from a very specific Planned Unit Development (PUD) to a recommended mixed use (E-MX-2) zoning, though the owners plan for it all be residential. In conjunction with the zoning change the historic Queen Anne house will be locally landmarked and rehabilitated back to its former glory, including interior remodeling. The exterior character defining features that make this Queen Anne house special will remain and be protected by Denver’s landmark ordinance if the designation passes.

The zoning changes and plans for the site, along with the designation, will be discussed at the Greater Park Hill Community’s September meeting, which will be held on September 2nd at 5:30 PM. The link will be on their website at: https://greaterparkhill.org/.

Brief History of the Robinson House

The house is historically known as the Robinson House, the name of the family who owned it. Research has revealed it to be one of the oldest remaining houses in the neighborhood. The house was built on speculation in 1889 for John Cook Jr.’s planned “North Capitol Hill Division”, during Denver’s first major housing boom. In the 1880s, largely fueled by the silver industry, Denver’s economy was booming and its population growing. As the needed for housing grew, Developers furiously platted land outside of the city’s core. Cook was one of these developers and built the Robinson House, advertising in the Denver Republican in May of 1889, to help attract buyers to an area he hoped would become just like Capitol Hill, its namesake. Cook’s dream was not to be realized as the bottom fell out of the silver industry during the Panic of 1893. Denver’s economy slumped and the building boom stopped abruptly. The Robinson House represents this boom-and-bust cycle in Denver’s past and harkens back to a time when a horse powered streetcar connected residents of Cook’s North Capitol Hill Division to Denver’s downtown amenities. 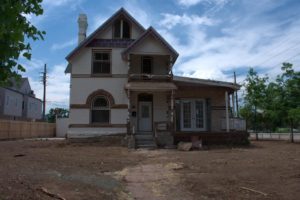