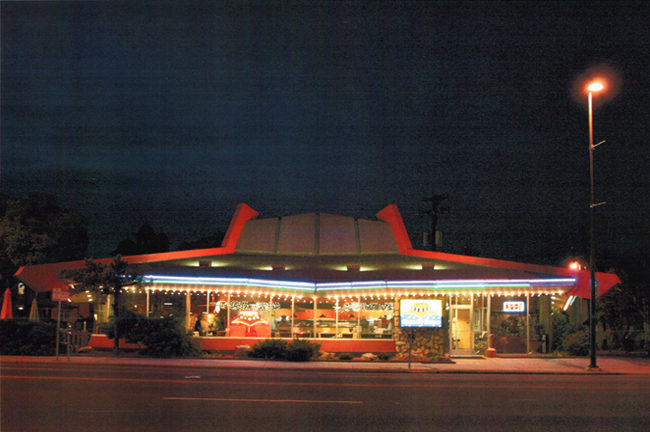 Googie Diner to be Saved, Now Listed on National Register

The Googie‐style building at Colfax & Pearl, known to many as Tom’s Diner, will be saved from demolition and reinvented through a partnership between GBX Group and the longtime owner. The diner first garnered public attention in May 2019 when the City of Denver posted it as a potentially historic structure due to a request for a certificate of non-historic status, which is often a precursor to demolition.

In December 2019, following a sometimes-intense, months-long debate about the fate of the building, GBX Group and the longtime owner had the building listed on the National Register of Historic Places. This status makes the building eligible for state and federal tax credits, preservation grants, low-cost construction loans and protection through preservation easements.

In 2008 and 2009, preservation professionals surveyed East Colfax to identify sites of significance. The diner was among the most intact buildings in the corridor, and was deemed eligible for the National Register of Historic Places. Formerly the White Spot restaurant, built in 1967, it is an excellent example of the Googie style.

“The building’s unusual architecture is an expression of the style that originated with a California coffee shop of that name after World War II and became popular along highways and major thoroughfares throughout the country. The style was viewed as futuristic, displaying features such as cantilevered and tilting roofs, walls, and windows, as well as geometric shapes and acute angles. The style also used expanses of glass, metal, plastic panels, and stone veneers. The architects for this building, Armet and Davis of Los Angeles, are considered the preeminent designers in the Googie style.” – From the Historic Denver Guidebook on East Colfax Avenue

Historic Denver worked to find a creative solution that would satisfy the community’s interest in saving a piece of Denver and Colfax history as well as the economic interests of property owner. Historic Denver brought ideas, contacts and resources to the table, which lead directly to a positive outcome.

“There had to be a solution that benefited everyone. That’s when we reached out to GBX Group, which specializes in preserving and operating historic real estate in cities,” Executive Director Annie Levinsky said. “They were instrumental in protecting the nearby historic George Schleier Mansion, and we knew they could help.”

The City and County of Denver’s demolition review process provided critical notice and time to bring a building’s fate to the attention of the community. This is the purpose of the process — established in 2006 — to ensure that irreplaceable buildings are not lost without due consideration, that the community and owner have the chance to weigh the loss of the building, and to seek alternatives.

In June and July 2019, more than 700 people signed a petition asking those involved to seek a preservation-minded solution, and a group of citizens advocated for its preservation through a local landmark application, which extended the consideration period. That application was later withdrawn, citing the hoped-for alternative and collaborative approach. The co-applicants said, “It is our firm belief that the future of this building is in good hands, and [we] think that interested parties can come to a conclusion as soon as possible.”

In September 2019, Denver City Council approved changes to the demolition review process, which in the future will focus less on historic designation as the only path at the outset, and more on collaboration and win-win outcomes, including exploring preservation options and incentives before City Council, property owners, or community members are forced into a binary choice between demolition or landmark designation..

Tom’s Diner Declared Potentially Historic, But Could Still Be a Goner, Westword, May 22, 2019

As the co-applicants for the Landmark Designation of 601 E Colfax, AKA Tom’s Diner, our primary goal in this process has been to initiate a conversation that would inspire thoughtful and informed choices for the property before going forward with demolition. After our initial application was submitted, we presented creative solutions for Tom and Alberta to consider in their plans and we invited developers known for recognizing the value of historic preservation to the conversation. We believe that these conversations are leading to a favorable outcome for all parties and have decided to pull our application before the issue is forced onward to Denver City Council. It is our firm belief that the future of the building is in good hands and think that interested parties can come to a conclusion as soon as possible. We hope that new parties coming to the table can use creative strategies to include the preservation of the iconic Googie-style building in a development that enhances the Colfax corridor. This was no small effort. Thank you to everyone who has donated their time, effort, personal stories, architectural expertise and patience to this cause over the last few weeks. We also appreciate the Landmark Preservation Commission for their diligence in creating the time and space for these crucial conversations to take place. This outcome wouldn’t have been possible without the interest in honoring historic buildings, while striving to meet the needs of building owners and developers. We absolutely acknowledge the challenges this process has presented for Tom Messina and his family. Tom, thank you for sitting down with us and listening to our concerns. We hope our dedication to finding a solution that met your needs was evident throughout the process. We hope this outcome motivates other residents of Denver to work with the City, developers, and their fellow community members when historic structures are threatened in the future. Through collaboration and continued conversations with all interested parties, we can drive Denver’s rapidly-changing landscape in a way that honors our history, acknowledges the gravity of our present challenges and invests in the quality of our collective future.

We are grateful that our community cares about its architectural and cultural heritage, and appreciate all those who worked hard to reach this win-win outcome. We look forward to seeing the new ownership team infuse new life into a valued piece of Colfax history. Through projects such as this, the corridor has a chance to thrive as a place with both a storied past and a bright future.