In 2021, a handful of residents from Denver’s West Side began exploring the possibility of applying to the city designation of a local historic district that would reflect and preserve the cultural history of Jewish immigrants in the area. 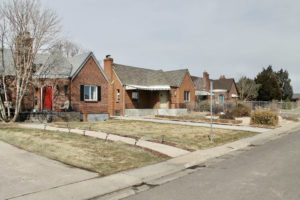 A view of Winona Ct, a street included in the potential district boundaries, north of W. Colfax Ave. the house with the fence around is 1565 Winona Court. Photograph by Ron Sladek.

The residents partnered with Historic Denver, Denver City Council members Amanda Sandoval (District 1) and Jamie Torres (District 3), and Congregation Zera Abraham synagogue near WeSloan’s Lake. The group enlisted the services of Tatanka Historical Associates to research and prepare materials about the potential district. The group has also partnered with the Rose Community Foundation.

East Europeans of Jewish descent began arriving in Colorado in the 1870s — most escaping state-sponsored anti-Semitism in their homelands. A small settlement formed along the west side of the South Platte River at Colfax Avenue. As more Jewish immigrants found their way to Denver the settlement grew, expanding westward block by block. In 1891 the town of Colfax was incorporated, stretching from the river to today’s Sheridan Boulevard. Between the early 20th century and the 1950s the community blossomed, becoming in essence a small Jewish town referred to by those living there as part of “the West Side.” Businesses catered to the unique needs of the Jewish community, and as Jewish social and philanthropic organizations grew, new buildings were constructed to house them. While today the population of West Colfax is more diverse, there is still a strong concentration of Jewish residents. A number of original buildings and cultural centers remain, but over time their numbers have declined.

Historic Denver has partnered with the residents, contributing $15,000 from the Historic Denver Action Fund and lending in-kind technical support to the effort to explore the creation of a historic district. Historic Denver will be assisting the neighbors and other partners involved in the project with outreach efforts.

A historic cultural district is a tool that enables the preservation of areas not just for architectural merit but for the relevance to key cultural identities and events. Denver currently has two Historic Cultural Districts: Five Points, a district that celebrates Denver’s African American history and culture, and La Alma Lincoln Park, a district that highlights the neighborhood’s critical role in the Chicano rights movement. La Alma Lincoln Park was also an Action Fund project. Neighborhood plans from the City and County of Denver support a Jewish historic cultural district in West Colfax, and the Discover Denver program (a partnership of Historic Denver and the City and County of Denver) provides insight into some buildings’ relevance.

In March of 2021 residents of the West Colfax neighborhood became concerned when the house at 1565 Winona Ct. was posted for the City’s demolition review process, following a Certificate of Demolition Eligibility application. The city identified the house as potentially eligible for landmark designation for its association with the development of West Colfax, the Boscowitz Family, and its English-Norman Cottage style of architecture. The Boscowitzes were a prominent Jewish family who owned the Star Bakery in the Lower West Colfax area. The bakery provided the area with kosher baked goods and was representative of the many family owned Jewish businesses that once existed in the area.

In order to discuss solutions and possibly save the home, three West Colfax community members filed a notice of intent to designate, and mediation began to find a solution. Involved in these discussions were Historic Denver and Councilwoman Sandoval’s office. A solution was eventually reached that saw parts of the original façade retained and the original fourplex design scaled down to keep with the scale of nearby homes on the street, but the process drove home the possibility that more of the historic fabric of the neighborhood, especially those that tell the story of the neighborhood and are representative of Jewish culture, could be lost. After a handful of meetings between neighborhood residents, Councilwoman Sandoval’s Office, Councilwoman Torres’s office, a representative from the Zera Abraham Synagogue, and Historic Denver, the group decided to pursue a potential historic cultural district to protect the neighborhood and the cultural story it represents.

The outreach efforts for the potential district are just getting underway, and the community members and their partners will work to provide as much information about the district, the story, and what it means for the residents. This will be accomplished through a series of public meetings, flyers, articles, and residents may reach out to those involved at any point to ask questions. In tandem with these efforts, Tatanka Historic Consultants will work on the designation, which includes research and interviews to get as much of the story behind the district captured as possible. Funding for writing the designation and related outreach comes from Historic Denver’s Action Fund, a contribution from  the Rose Community Foundation, and contributions from Denver City Council districts 1 and 2.

In 2013, the citywide Discover Denver building survey began (and is ongoing). As part of architecturally surveying every single building in Denver, Discover Denver surveyors identified some West Colfax area buildings that likely meet criteria for local preservation and designation. Research conducted as part of Discover Denver can help inform a proposal for a historic district, including which buildings should be included or excluded.

Please reach out to Michael Flowers, director of preservation action, at 303-534-5288 ex. 27 or mflowers@historicdenver.org, if you are interested in helping with the district efforts or wish to provide information on the cultural history of the area.